The Truth Behind Valentine’s Day

The history of this romantic holiday isn't as love-filled as you might think. 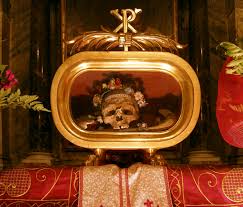 According to history.com, the skeleton of St. Valentine has been scattered around Europe. His skull is displayed in the Basilica of Santa Maria in Cosmedin, Rome, and other bones are in Scotland, Ireland, England, France, and the Czech Republic.

February 14 is Valentine’s Day, the holiday that celebrates love and affection. In the pre-COVID world, you probably saw couples dressed to the nines and out on a dinner date. You’d see frantic, last-minute shoppers picking stores clean of their chocolate supply. The floral section of HyVee would only have a few wilted plants left for purchase; roses always went first, and if you weren’t quick, you’d never get your hands on any. For one day out of the year, romantic love seemed to consume us all.

But how did this holiday come to be?

Why do we decide to put such great effort into expressing love to our significant others on some seemingly obscure day in February?

Why is it called Valentine’s Day, of all things?

The truth behind this celebration of eros love is much darker than you might expect.

The story begins over 1,750 years ago in the Roman Empire. At the time, Emperor Claudius, also known as Claudius the Cruel, ruled Rome. Christianity was gaining popularity there, and he was doing all that he could to keep it from sticking. He outlawed Christian engagements and marriages to keep people from raising families and passing down their faith. However, banning something isn’t always effective in eliminating it. Despite Claudius’s decree, young Christian couples still got married; they just had to be sneaky. Catholic priests would defy the orders and perform marriage ceremonies in secret. Among these priests was a man known as Valentine or Valentinus.

Upon discovering that Valentine was breaking the law and marrying these couples, Emperor Claudius condemned the priest to death. According to an article from “Wretched Richard’s Almanac”, Valentine was “beaten about the head” before being decapitated. His estimated date of death was Feb. 14, 278.

How an executed priest’s death date transformed into a holiday of affection and romance is a highly debated topic. After all, how could something so gruesome and bloody turn into something that celebrates the love humans have for one another?

The passing of nearly two thousand years seems to have muddied the truth. Valentine may have been executed on Feb. 14, but historians are still uncertain. Some people entertain the theory that the Catholic Church had a more secretive agenda when they named Feb. 14 as St. Valentine’s feast day. Around that time, the pagans celebrated Lupercalia, a festival of love dedicated to several Roman gods. Pope Gelasius may have placed Valentine’s feast day where he did with the idea of overshadowing Lupercalia in his mind. The timing of the pagan love celebration and St. Valentine’s feast day could have contributed to the eventual association of romance, affection, and Valentine’s Day.

There is also a legend as to how Valentine’s Day cards came to be. According to a website from history.com, Valentine may have had a friendship or relationship with his jailer’s daughter. Valentine left a letter for her before he died and signed it, “From Your Valentine”.

According to an article by “Forbes”, Valentine’s Day cards were popularized by Esther Howland. In the mid-1800s, Howland’s father, Southland, was a bookstore owner and stationery supplier in their hometown of Worcester, Massachusetts. Among the many paper products sold at their store were beautiful valentine cards shipped to them from England.

Fascinated with the lovely letters, Howland decided to make her own in a similar style. She designed a few different cards, and her brother went out in the cities to market them for her. It didn’t take long before her business began to flourish, and the New England Valentine Co. began to spread across the country. Thanks to Howland, we now have dozens of options when it comes to selecting a Valentine’s Day card.

During the Roman Empire, the man called Valentine remained steadfast in his belief that the benefits of performing marriage ceremonies outweighed the costs he would face if caught. He paid for his decision with his life, but his legacy lives on. Today, we buy Esther Howland’s Valentine’s Day cards, floral bouquets, and decadent chocolates for the ones we love. Nearly two thousand years may have passed since Valentine’s days on earth, but the human desire to give and receive love remains the same.