On Jan 27, President Donald Trump signed an executive order, which had the intent to bar citizens of Iraq, Iran, Libya, Somalia, Sudan, Syria and Yemen from entering the United States for 90 days, banning refugees for 120 days with the exception of Syrian refugees, which would have been banned indefinitely.

Despite this order being temporarily blocked on Feb 3 by federal judge, James Robert, many questions have been raised about the refugee vetting process.
The vetting process is complex and can be described most accurately in the steps that one must take in order to receive a green card, access into the US and resettlement.
A refugee is someone who has been forced to flee his or her country because of persecution, war, or violence. There are approximately 65.3 million forcibly displaced people worldwide, 21.3 million of those people being refugees according to the USA for UNHCR: The UN Refugee Agency, many hoping to get away from the turmoil in their respective countries.
This entire process can take anywhere from 18-24 months, but every case varies and there is no set limit of how many years it can take a refugee to be able to come to the US. At any time a refugee can be turned away.
Roughly, 3 million refugees have entered the U.S. since Congress passed the Refugee Act of 1980 according to Cultural Orientation Resource (COR) Center. 95,000 of those refugees having been relocated to Minnesota.
Along with Washington, Minnesota is the second state listed in the suit to sue the federal government in an attempt to permanently block Trump’s executive order. The state is claiming the ban would hurt the economy. 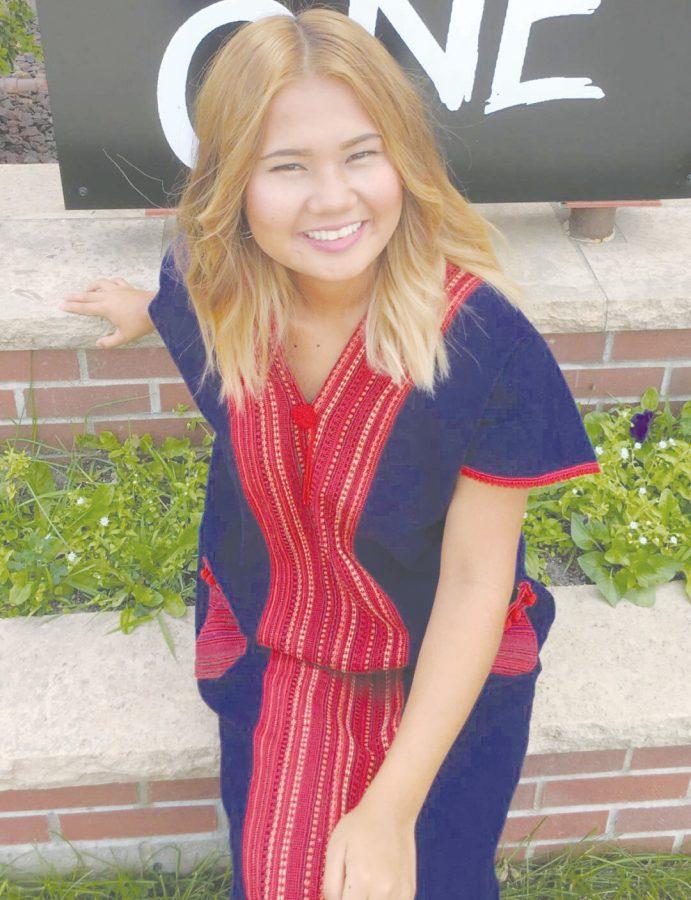 Paw Sher has started to feel American after being in the United States. She came to the U.S. 10 years ago. “When you come here you don’t know any English,” Rober said. Photo Submitted

Senior Paw Set Sher is a refugee and a student at Albert Lea High school. Her immediate family were the first to come to the U.S. ten years ago from Thailand.
Sher’s family lived in one of the refugee camps in Thailand. They wanted better education, access to health care and job opportunities that they didn’t have in Thailand.
To come to the United States from Thailand, Sher’s family had to fill out paperwork which took many years. After waiting, they had to have physicals done to see if they were able to come.
“If you are not healthy, then they won’t take you,” Sher said.
Sher is in the process of becoming a United States citizen, but believes the process of becoming a citizen is taking too long. When her and her family first got here, Sher recalls having a hard time adjusting to life in America.
“When you come here, you don’t know any English and it’s hard to connect to people,” Sher said.
Although Sher had a hard time adjusting, over time she started to feel American. When she is with American people she feels American, and when she is with refugees she feels like a refugee.
“I want to be a U.S. citizen,” Sher said. “But I also want people to consider me as a refugee, because that’s me.” 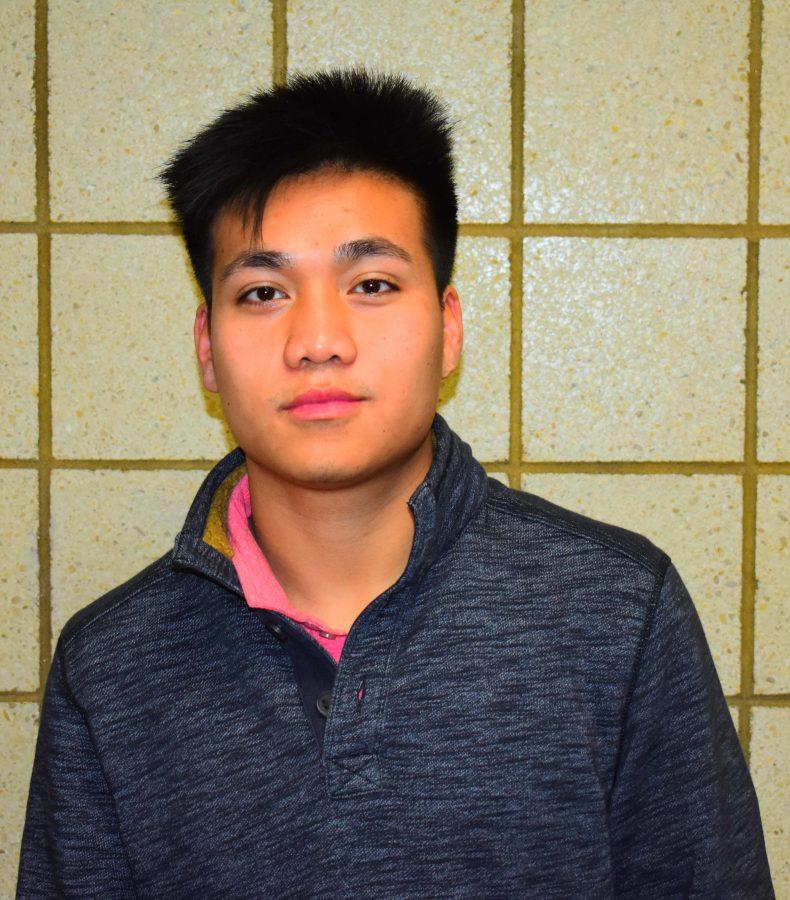 Lwen had a hard time communicating with people after coming to the United States. He lived in Mae La, a refugee camp in Thailand and has been living in the United States for eight years. “My parents wanted us to have good education and have a better life,” Lewn said. Morgan Bjorklund

Ku Lwen moved from Mae La, a Refugee camp in Thailand, to New Jersey, where his family lived for a year before moving to Minnesota.
He has been living in the U.S. for eight years, and is still in the process of becoming a U.S. citizen. Lwen and his immediate family are the first generations in their family to come to the U.S.
“We moved here to get a better life, away from the hardest things,” Lwen said. “My parents wanted us to have good education and have a better life; to live our lives.”
Lwen said that it was hard when they first moved here because they could not communicate with many people; English was their second or third language. It was hard to make many friends with a language barrier. They also did not have a car at first and could not do much without a source of transportation.
“For some of us, we are afraid to make friends or talk with others because we are afraid that we may not say the right things,” said Lwen. “Sometimes we are afraid that we will say something wrong to them and they won’t like us. Refugees are always quiet; they are just too scared. They are always by themselves and they do not talk a lot. They always try to keep to themselves, away from the others.”
Lwen says that Thailand is not like the U.S. and it is much more difficult with all of the different freedoms. They did not have many freedoms in Thailand. Some people could not go to school because their parents could not afford it. Instead, they went to work to support the family.
“I miss Thailand a lot. It was my hometown, where I was born,” Lwen said. “I miss my family, but I feel like here is my home because I came here when I was young.” 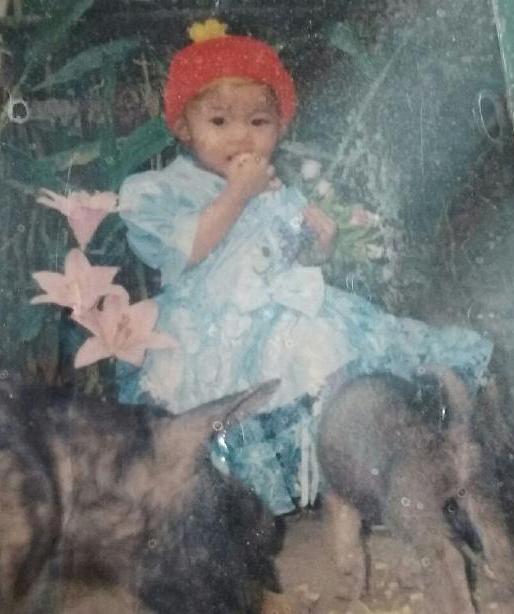 Say Rober as a young child in Thailand. Rober came to the United States when she was eight years old. “It took us between two to three years [to come to the U.S.] since my dad was still in the hospital,” Rober said. Photo Submitted.

Change is difficult. Especially if the change is fleeing from a toxic environment. Say Rober, freshman, was brought to the United States by her parents for a better education, safety and an overall better life.
At about eight years old Rober went from a refugee camp in Thailand to a whole different world in the U.S.
Rober says life in the camp was hard and the conditions in her country were terrible.
Rober’s country was at war, there were even shootings in her refugee camp. Not to mention crowded cities, buildings burnt down from war and at times there wasn’t access to potable water. Education only belonged to those who had the money to pay for it; a place where money is power.
“Over there money is everything, you can do anything if you have money,” Rober said.
Kyo Htoo, junior, lived under similar circumstances as Rober in the same country. Htoo was 10 years old when he and his family moved to the U.S. Prior to coming to the U.S., Htoo lived in a refugee camp near a jungle.
Changing schools is challenging for many but even more challenging is it to make a switch in countries, language and school. When Rober and Htoo arrived, everything was new to them. Here they could attend school for free. In Thailand, girls had to have their hair short, wear uniforms and pay for it all.
“It was very, very difficult because I didn’t know the language and stuff, I would go home and cry,” Rober said. “It’s difficult to make friends and be social with other people.”
After filling out multiple pieces of paperwork, waiting for years and taking a citizenship test, Htoo, Rober and their families are now United States citizens.
Rober did not have to take the test herself. She says the process for her family took between two to three years.
Both Htoo and Rober are not entirely sure how the refugee or citizenship processes work, but they are both grateful to have been taken out of those circumstances.
Regardless of the barriers that overcame them, they are now enjoying the opportunities their parents and the US have offered them.